Not long ago I heard someone comment that “70 percent of shopping occurs after 6 PM”. This is a statement that has been quoted for a couple decades now, and like most people, I accepted it for a long time. The more I became acquainted with retail, though, the more I had my doubts. Eventually I even began to look for a source to corroborate the claim. It seems there really is no source. In fact, the information we do have suggests something very different.

The best source of information is the American Time Use Survey compiled annually by the US Bureau of Labor Statistics. It shows that the number of people shopping actually peaks in the early afternoon and steadily declines through the remainder of the day. Fewer than one in five shoppers are out in the evening hours from six to ten. 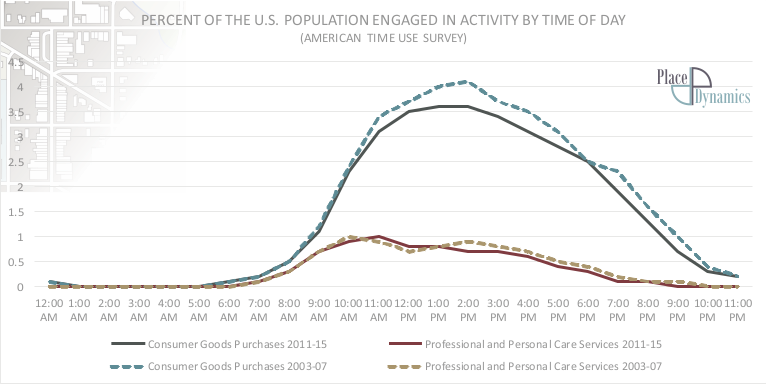 The data tells us a few things more. Overall, we are shopping less. The number of people shopping* dropped from a daily average of 38.0 million in 2003 through 2007, to 34.3 million per day in the 2011 to 2015 time period. Comparing evening shopping between these two periods, the percentage of shoppers out during the hours of 6 PM to 10 PM declined from 19.5 percent to 18.7 percent. The percentage of people out during the daytime hours from noon to 6 PM remained relatively unchanged, while there was an increase in morning shoppers (8 AM to noon) from 19.7 percent to 20.4 percent of the total. The morning hours also saw in increase in the percentage of people patronizing service businesses.

Other data sources show that patterns vary for different kinds of retail businesses and shopping formats. Simply open up Google Maps to understand this. When you click on many businesses and scroll down the information window you will see “popular times”, a bar chart that reflects the typical customer traffic patterns for that business, by hour, for every day of the week. A grocery store will typically peak around four in the afternoon while a home improvement center will peak around eleven in the morning. Businesses like a coffee shop may have an uneven pattern of busier and slower times.

The upshot of this is that while our downtown businesses are certainly leaving some of the market potential on the table when they close early, it may not be as much as we have assumed. Whether it makes sense for those businesses to be open in the evening is really a more complex question that needs to factor in the kind of business, surrounding businesses that might help draw traffic, and the additional sales volume that might be captured. If the goal is to capture more sales, these businesses may best be served by encouraging them to develop their web presence, engage in online sales, and provide same day delivery services, rather than simply extend hours.

* Rather than “people” we should probably be using “shoppers by hour”, as the same person might be shopping more than one hour, but the simpler term will make this easier to read. 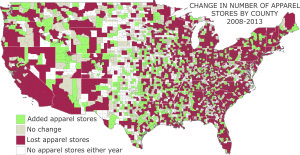 We are often approached by communities asking how they can attract more retail to their business districts. That may be the wrong question. The retail sector is experiencing a massive transformation as people are spending less, the internet is taking an increasing slice, shopping habits change, and chains continue to close stores at record levels. The best locations will continue to thrive, but all others need to be thinking about a more comprehensive approach to creating healthy business districts, in which attraction is only part of the picture.

Our white paper provides a comprehensive look at how retail is changing and what it might mean for your community, district, or center.