Marquette is the largest city in Michigan’s Upper Peninsula, situated on the shores of Lake Superior three hours north of Green Bay. Though isolated, the city is a vibrant and progressive community, and home to Northern Michigan University. It is surrounded by natural beauty, complimented by its own wonderful downtown and waterfront. The City has defined an unique niche for itself as the silent sports capital of the Upper Peninsula, in addition to being its economic and service center.

While Marquette’s prospects for attracting significant outside industry are limited, the community has become a destination for mid-career professionals and others who see it as a desirable place to live and own a small (micro) business. Our research included an extensive analysis of startup businesses (along with existing businesses, branch plants, and relocations) to document sources and sectors of growth. Important recommendations included strategies to support these emerging business opportunities, continuing to foster revitalization in the downtown and elsewhere, developing the region’s agricultural production and local food hub, and creating an organization to advocate for businesses. 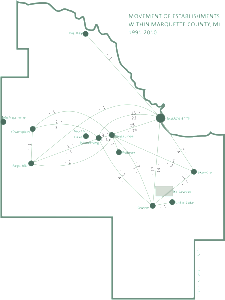 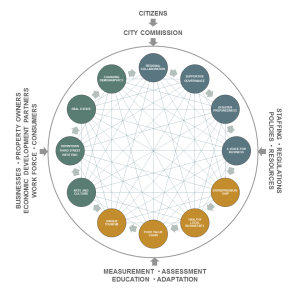 We recently completed a survey of downtowns for the Wisconsin Downtown Action Council. One of the more interesting findings was a tendency for communities that considered themselves to be successful in implementing their downtown plans to also report the highest vacancy rates in their downtown buildings. When we dug into this paradox we found that respondents in local government positions were most likely to consider their implementation efforts to be successful. For these respondents, downtown revitalization centered on physical improvements such as road reconstruction and streetscaping, downtown plazas, parking lots, and redevelopment projects. Success was measured by whether or not the projects were constructed, and not necessarily upon their impact on downtown businesses or real estate.

The point of this story was driven home as I recently walked the streets of a small downtown in Tennessee. Workers were laying the last bricks in an attractive new streetscape project. As I snapped a picture a man nearby came up to chat with me. After a moment he made the comment “I wish they were as concerned with trying to get businesses in these empty buildings as they were with brick sidewalks.” Perhaps he was a downtown businessperson or property owner, or maybe just an interested citizen, but his priorities were certainly different from those of the city.

We need to recognize that successful planning addresses a wide variety of issues through projects, programming, activities, and other approaches. Perhaps this is a problem with the downtown plans in the Wisconsin example. If these communities’ plans were comprised solely of infrastructure projects, then they missed the big picture. Downtown property owners, business owners, and residents might have told them to recruit businesses to vacant storefronts, provide assistance with marketing and promotions, and make downtown a lively place with events and amenities.

As planners, economic developers, and local government officials it is necessary for us to recognize that success is not defined only from one particular viewpoint. Whether it is a downtown district, neighborhood, city, or region, there will be a diverse set of stakeholders each with their own desired outcomes. Plans should include success measures that can be monitored at regular intervals to determine whether progress is truly being made, or if we are simply implementing projects without consideration of their impacts.

Place Dynamics and the Wisconsin Downtown Action Council have teamed up to compile a survey of downtown revitalization conditions and practices within Wisconsin. We received 121 responses from 73 communities across the state, with a good representation of large and small, and rural and urban places. Twenty-two questions explored existing conditions and outlooks, program organization and financing, revitalization priorities, programs and tools, and familiarity with the Wisconsin Downtown Action Council. Although limited to Wisconsin, the findings will have relevance for programs in other states.